‘3am Spiritual’ from the forthcoming Smith Westerns album ‘Soft Will’ out June 25th on Mom+Pop. Available digitally now via iTunes, and for immediate downloa…

Faith Comes By Hearing was featured for their non-profit work in this weekend’s Washington Post article “Plugging the Planet Into the Word: Technology Vastly Expands Bible’s Audience, Christianity’s Influence.”

The article, which quotes Faith Comes By Hearing’s Laurie Westlake, discusses how new, technologically advanced audio Bible formats, which are being produced in local languages for cultures worldwide, are able to spread the teachings of the Bible to millions of people who have never had access to it before.

“Using the audio Bible to reach out to cultures worldwide is a movement to revitalize religion in the world, and it’s huge,” says Westlake.

The article also highlights how newly translated audio Bible formats, including MP3s, CDs and downloadable audio Bible Podcasts, are able to teach villagers in impoverished countries how to read through literacy programs and “listening groups” where they can listen to passages of the Bible while following along in their printed copy. Many of these villagers cannot afford to go to school, so these groups are the only educational programs they have ever participated in.

As Westlake explains in the article, the Faith Comes By Hearing organization started over 33,000 of these listening groups during the last year alone. They are currently comprised of approximately 3 million members worldwide, which is three times the number of those attending two years ago.

To learn more about Faith Comes By Hearing, please visit the “Who We Are” section of the website: http://www.FaithComesByHearing.com/who-we-are

Description: “‘Is your child all right?’ ‘Everything is all right,’ she said.” [2 Kings 4:26]
“The subject of this morning’s sermon will be “Infant Salvation.” It may not be interesting to all who are present, but I don’t remember ever having preached on this subject to this congregation before, and I am concerned that our sermons cover the whole range of theology. I think there is no one point which ought to be left out in our ministry, even though it may only yield comfort to a certain group.

Perhaps the majority of this audience have at some time or other had to shed tears over a child’s little coffin-it may be that through this subject consolation may be afforded to them. First, then, this morning, I shall endeavor to explain the way in which we believe infants are saved; secondly, give reasons for believing this; and then, thirdly, seek to bring out a practical use of the subject.” 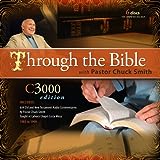 Computer use only with a DVD-Rom Drive. We invite you to come alongside Pastor Chuck as he teaches Genesis to Revelation, verse-by-verse. As you read the Bible, we hope these commentaries will help you grow in your personal reading and understanding of God’s Word.

Pastor Chuck Smith has been teaching the Bible for more than sixty years, and this audio series, entitled the C3000 Edition was taught at Calvary Chapel Costa Mesa from the years 1985-1999. This series includes over 600 audio messages.

Contains 6 computer discs that may be accessed through any computer with a DVD-Rom Drive.

For to me to live is Christ, and to die is gain.” (Philippians 1:21).
Come, then, beloved; we have before us the picture of a man, the two sides of whose existence will both bear inspection; we have his life, we have his death: we have it said of his life, “to live is Christ,” of his death, “to die is gain;” and if the same can be said of any of you, oh! you may rejoice! You are among that very happy number whom the Lord has loved, and whom he delights to honor.

“The Kneeling Christian has been a source of inspiration, instruction, and blessing to hundreds of thousands of praying Christian all around the world. In its 12 chapters, this classic book on prayer answers the most basic and often-asked questions about prayer, such as: *What is prayer? *Who may pray? *How shall I pray? *Must I agonize? *Does God always answer prayer?